salt with your coffee

A trip round the world without flying (almost).

After our day of touristing in Himeji we headed up to Osaka, but then promptly left again to our hostel in the suburbs, which was really more or less in a separate town (Sakai).

Osaka’s a big city, and that’s pretty much all it’s got to recommend (or disrecommend) it. The other travellers we met there had spent their time shopping, going to the aquarium, and visiting the castle.  We didn’t fancy any of these, so instead we had a catch up day hanging out in the suburbs, doing laundry and eating ice cream in the sun.  Bliss.

Washing our clothes at a Japanese launderette was entertainment.  We’d laughed at a guy in our hostel who thought he’d accidentally scented his clothes instead of washing them when he went there, but then we very nearly at least half-fell into the same trap.  The first challenge was finding the place, since the sign was in Japanese and it was set back from the street.  This accomplished, we then had to figure out which machines were washers and which ones driers.  The relative prices told us this: the driers had a price for five minutes (it turned out), which was way too cheap to be a wash price.  This hurdle successfully passed, we looked around for a machine dispensing washing powder.

There was one dispenser type machine on the wall, which must surely have been for this purpose.  We stuck our money in, pressed the button, and got a tiny pink cardboard box, about the size of a couple of packs of chewing gum.

Inside were two flat, slightly sticky sponges, that smelt strongly of flowers. At first we thought this must be some crazy new-fangled, super-compressed Japanese detergent.  We chucked a sponge in the machine with our clothes, but then had second thoughts. Surely this tiny little sponge couldn’t wash all of our gross travel worn clothes?  After some intense discussions, and some highly interested looks from the Japanese people doing their laundry, we decided these must be things you put in the dryer with your clothes to make them smell ‘nice’.  You couldn’t buy detergent at the launderette, but you could buy these.  Oh, the mystery.

Arthur went to the supermarket to buy some real detergent, and I sat in the sun minding our laundry, which I’m sure was totally unnecessary since stealing seems not to have occurred to Japanese people.  There are shops in busy train stations where the merchandise is displayed round corners, so that the shop keeper wouldn’t have the slightest idea if somebody was emptying their fridges.  Or perhaps they just have some robotic anti theft system.  They’re very keen to make sure nobody can be unjustly accused of stealing though — more or less whenever you buy something, the shop assistant will stick a little sticker on it to show it’s been sold.  Perhaps an unjust shop-lifting accusation would be enough to destroy your honour for life.  They do take reputation very seriously here.

I amused myself while waiting for Arthur to come back by examining the shoe washing machine tucked into the corner of the room.  Amazing.

So doing laundry turned into more or less a full day activity, with all the back and forthing we did, but we had a jolly old time.

Our hostel was a tiny place in an old (by Japanese standards) house.  It’s called ‘Drummer’s Dream’, and is run by some crazy musician types, who are constantly banging out tunes on any passing piece of furniture.  I loved it.

The front door was a slightly rickety dark wood sliding screen, which we slid open to step into the compact social space downstairs.  There was a little table with stools around it, a raised tatami mat area, and small galley kitchen.  The tatami room had 7 or 8 prettily patterned cushions arranged around a low round table, and that was it. The kitchen was stocked with robust but delicately glazed Japanese crockery: handleless cups that fit perfectly in your hands, and elegant little bowls.  Designy versions of the traditional cotton fabric towels you see all over Japan hung on the wall by the sink.

Out back was a little bathroom annexe, wrapped around a tiny verdant courtyard, and tiled with round flat stones in bright blues and greys. Up some exceedingly steep stairs were two dorm rooms, boys and girls, each with six beds.  And that was it.  I wanted to move in.

It wasn’t the last time I felt this urge in Japan.  These people know how to make a home.

Eating was the only other thing we really did in Osaka.  Apparently Osakans are famous for stuffing their faces, so we thought it was only right to follow suit.

Apart from the ice cream, we ate a lot of onigiri and convenience store sushi for our lunches.  This stuff is cheap by Japanese standards, and a million times better than the equivalent stuff back home. 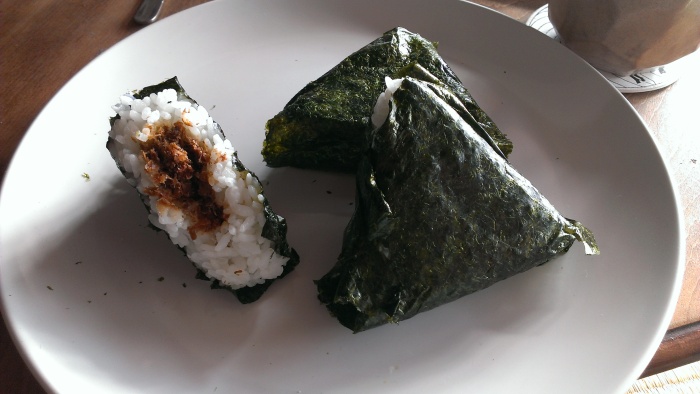 We also went for dinner at a pork cutlet place round the corner.  I couldn’t really eat anything but rice and salad, but the fried stuff looked delicious, and the atmosphere was great.  A proper rowdy local place, though it cleared out considerably when we got there.  This may have been something to do with the amount of whiskey one of the guys we were with had necked before dinner.

We hung out with two Welsh guys, an Australian girl, and a German guy in the hostel, mostly discussing the aspiration of one of the guys to find a Japanese dolphin trainer to marry.  I asked him if any sort of animal trainer would do, but apparently it has to be sea life.  I expect they’ve got magazines for that in Japan.

Our final meal in Osaka was an all you can eat buffet.  We ate so much that we missed our train, which meant we missed the last bus to where we were headed.  Needs must. 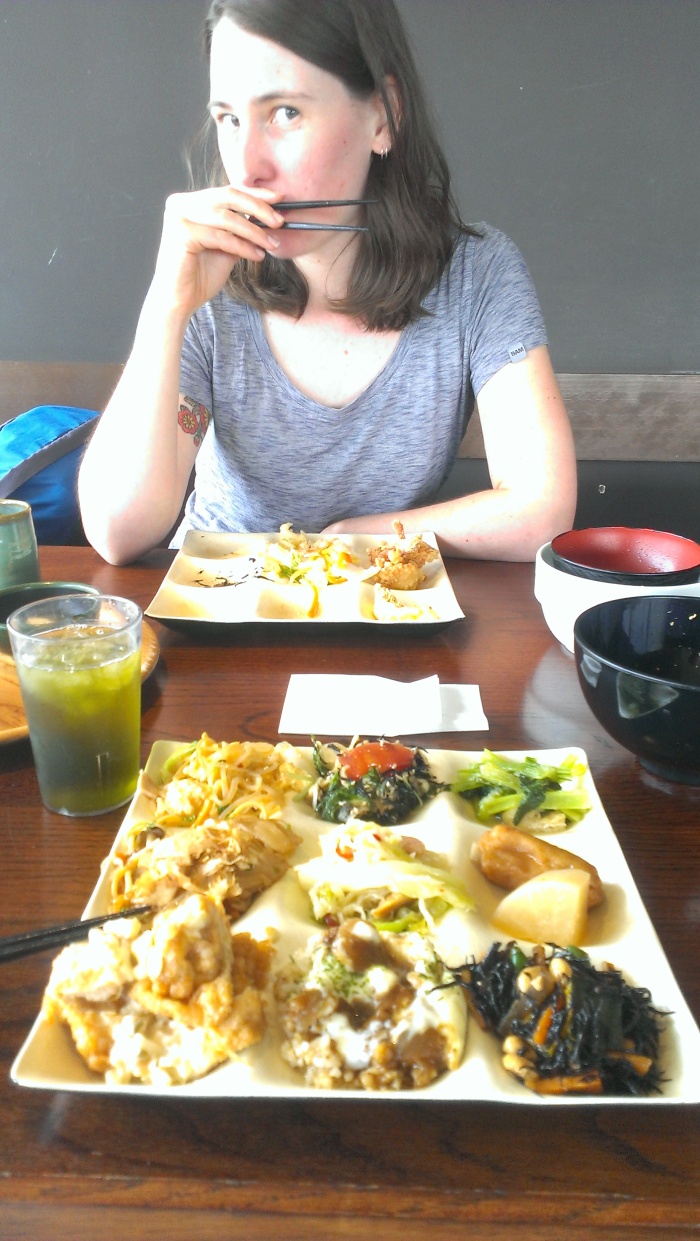 It was a good opportunity to try loads of different Japanese foods.  I especially liked the desserts, most of which I had no idea at all what they were.  They were all various pastel colours, and of indeterminate (though very nice) flavour and construction.

The buffet had a great view over Osaka’s high rises, and the huge ferris wheel near the train station.

Afterwards we were just about able to roll ourselves 30 metres down the road to the train station.  When the train-after-the-one-we-meant-to-catch pulled in to the station, we got to observe the world’s quickest and most efficient train turn around.

Once everyone had got off, a smartly attired cleaner approached each door.  Each person whipped through their carriage picking up rubbish (there wasn’t any, obviously), and turning the seats around.  Physically turning them around to face the other way, so nobody would have to suffer the discomfort of travelling backwards.  Brilliant.  Once each person had finished their carriage they got off, bowed to the train, and waited neatly for everyone else to finish.  Then somebody with a walky-talky got off, made some sort of signal, they all bowed together, and stepped aside to let the new passengers board.  It was all over in three minutes., and we were on the train again!

This time for an unscheduled stop in Tanabe…